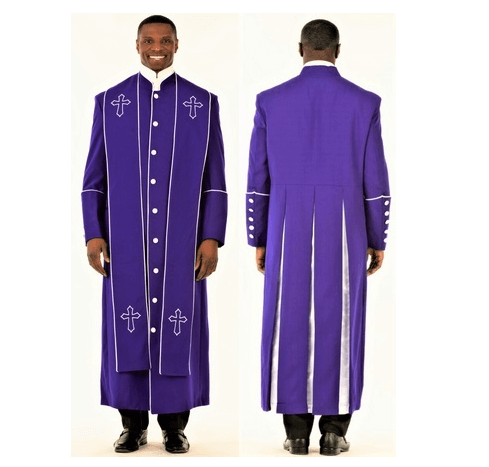 Even if you have a background in clerical history or theology - or even if you are just a churchgoer - it can become very difficult very quickly to keep tabs on all of the different vestments that you are liable to see during the course of a service. Adding to the confusion is the fact that different churches use the same vestments for different purposes and worse, occasionally disagree over what is proper or even improper use for a given garment.

In addition, the many sects out there are just as liable to disagree over the use of color in a garment to indicate its propriety in a given circumstance. While there are a dazzling number of vestments out there, ranging from choir robes to preaching jackets and everything in between, we here at Divinity Clergy Wear are going to shed a little light on many of them and offer a little insight into their history and use. This guide is not comprehensive but it rather serves to serve as an introduction to some of the many vestments and other clerical garments we offer here on our website.

Choir robes often take the form of a garment that is not necessarily intended to be reserved for choristers, and in fact it is common to see choristers apparelled in a surplice filling the office of choir robes.

The garments that today have come to be known as choir robes have their origins in the mists of antiquity and in fact it is nearly impossible to identify only one avenue by which they may have evolved. In the early days of the church, there was little if any delineation between the garments of the church and the non-clerical garments of the noble classes. In fact, there was little distinction between academic and clerical garments as well, blurring their origins. It is surmised by some that many modern clerical vestments have their origins in academic robes or in the garments worn by other nobility.

Today it is not uncommon to see choristers arrayed in choir robes such as surplices. Here at Divinity Clergy Wear we offer a Surplice with Lace, appropriate for both men and women and adorned with fine integrated lace. Our surplus also has wide sleeves and a squared yoke neck. Crafted from high quality white Viva, our surplice is as fitting as a choir robe as you are likely to find and created to offer superior style as well.

A chimere is a type of garment without sleeves that is usually paired with other vestments as part of the ecclesiastical effect of an Anglican bishop. Sometimes it is reserved for the Anglican bishop who is responsible for the administration of Communion.

It is a descendant of certain cloaks that were relatively widespread in secular circles and at times chimeres can be seen as part of the chosen dress of academics. Indeed, many of the vestments on this list will have similar parallel origin stories, and many have either direct contemporary or historical ties to academic uses.

Our chimeres are available in black, red and purple, and have a fluted back and a cord and button front closure. Typically they are worn paired with a rochet, which is another garment which is typically similar to a surplice but longer in length. Also, where the surplice has looser sleeves, a rochet tends to have tighter fitting sleeves.

It is customary for a rochet to be ankle length and to be made of white fabric. It looks like a fairly long white robe or tunic and can trace its origins back to a lay garment known as an alba or camisa. Interestingly, alba etymologically signifies “white” in Latin, and camisa more than likely has ties to similar Latinate roots that connote the meaning of “shirt.” None of this is surprising, after all, since a rochet typically takes the form of what is more or less a white shirt.

Stoles and tippets both take on more or less the same form. While both may be brightly colored, it is more common for a tippet to remain somewhat plain of form while a stole is free to take on more embellishment. Stoles are typically silken or richly embroidered and decorated, as are some of our models.

The origins of the stole and tippet may be in common, although there is some debate as to their certainty of how they came about. Like the other vestments on this list it is likely that they had their origins in lay arenas or even in academic settings.

The stole, specifically, probably originated as an accessory garment worn by nobles and serving as a sort of handkerchief that was worn draped over the shoulders. Noblemen would have had the resources to lavishly decorate such garments and that would easily account for their colorful presentation, as well as for the manner in which they are customarily worn nowadays.

Generally speaking, the stole is worn by a priest overseeing the Communion, and, as stoles may have originated as a napkin of sorts, in the past they may have been used as a napkin for the members of the congregation received communion, or as a cloth by which to sanitize the chalice between recipients.

Though they are not used for such purposes today, you can still find many a priest wearing a stole or a tippet, specifically those responsible for delivering the Communion. Right here at Divinity Clergy Wear, you can find a wide range of tippets and stoles for all of your clerical needs.

If you’re looking for tippets, you can find tippets in black, red, purple and blue right here on our site. As far as stoles are concerned, you can find a number of stoles on our web store ranging from plain offerings to ornately decorated garments to match the rest of your robes. Many of them are colorfully embroidered with crosses and finished with a satin sheen to put a graceful light on your clergymen as a finishing touch.

A rabat is a clerical waistcoat that was typically associated with French clergy and has largely fallen out of use. That being said, you can still find rabats here at Divinity Clergy Wear. It is difficult to find a rabat in a color other than black and they are typically made of wool. Their purpose was to create the appearance of a cassock about the neckline and where they are still worn they can be recognized by the appearance they take around the collar of the person wearing one. You can find Banded and Roman Rabats here at Divinity Clergy Wear.

The cassock is a fairly familiar clerical garment in wide use throughout many different churches. It takes the form of a full length robe, typically in a single color like black, though the office it denotes is subject to the distinction according to the sect.

Its origins are likely traceable to a garment that became popular several hundreds years ago in France known as a pelisse - or, ‘skin’ or ‘hide.’ As with some of the other garments in this article, it likely found its origins among the secular members of society. In this case, the pelisse was a full length garment worn by laypeople, probably to provide protection against the weather and warmth.

The pelisse probably became adapted by the members of the clergy due to its length, simplicity and plainness. Because it was plain and not ornately decorated, it stressed the importance of humility and gained a loyal following in clerical circles. A cassock in black underscored the importance of humility and the secular duties of the church as well, and that is likely the reason that cassocks were so often found in black. Today, the cassock is typically found paired with a belt known as a cincture.

Here at Divinity Clergy Wear, you can find several options in cassock and cinctures, in traditional black as well as in red and purple. Regardless of the office you need to apparel, you will find our cassocks universally satisfactory.

Other Clerical Robes and Vestments

In addition to these selections from our collection of vestments, we offer many other robes and vestments for both men and women members of the clergy right here on our website.

One of the things you’ll have to consider when you’re shopping through any catalog of vestments is what type of import you’ll want to lend to the members of your clergy. On the one hand, you might want to stress the importance of humility and simplicity, as did those who took up black vestments and made their use nearly ubiquitous in the church. If you’re looking for traditional styles, whether in black or other colors, you will find them among our many styles of robes for men and women that you will find right here.

As a representation of the austere style that you can impress into the members of your clergy with our collection here at Divinity Clergy Wear, check out our Men’s Preacher Clergy Robe in Black and White. While this is still a very attractive and sophisticated robe, it is one of the simplest in our collection and one of the least brightly styled. It lacks the complex embroidery and brocade patterns of some of the other robes in our collection, relying rather on the severity of its character to make its mark. It does just that. Full length and black, this robe makes the most of brightly contrasted white piping and trim along the front.

If you’re looking for a similar effect among our clergy robes for ladies, take a look at our Ladies Class A Vestment that includes six pieces. It comes with a black ladies Roman Cassock and matching cincture belt, along with a white surplice with traditional lace and a black tippet, cord and cross. Much like our matching set for men that you can find in our collection of clerical robes for men as well as the robe presented above, this is an excellent representation of the type of austere personality you can easily find in some of our clerical robes for ladies.

While you sometimes need to present a very serious front among your clergymen and women, there are times when you might want to breathe a more contemporary style into their manner. This stands in direct and stark contrast to the traditional and austere aesthetics that you are likely to encounter in the clerical garments from other providers. That’s one of the things that makes us unique here at Divinity Clergy Wear. While we offer plenty of traditional offerings, when you decide you need something new and fresh, you can find that right here.

From the same catalog containing the robes we investigated above you can find offerings like our Men’s Adam Clergy Robe and Stole in Purple and White. This set of robes is possessed of an entirely different character than the stern and serious offerings that we investigated above. It is light, inspiring, colorful, even animated. It is also only one single offering from a huge collection of similarly spirited offerings in bright colors and elegantly and extravagantly decorated. Take a look through our catalog clergy robes for men and women, and in addition to this offering you will find options like our Men’s Cain Robes, Men’s Joseph Robes, Trinity Clergy Robes, Asbury Robes and many more.

As you can see, we offer you a full range of clerical garments ranging from traditional choir robes to the most sophisticated and modern clergy robes for men and women that will not only impress but sway just about any congregation. Take this opportunity to look through our collections to find the styles that speak to you, and if you have any questions about any of our products, feel free to give us a call. You can reach us at 877-453-3535, so give us a call sometime - we’d love to hear from you.