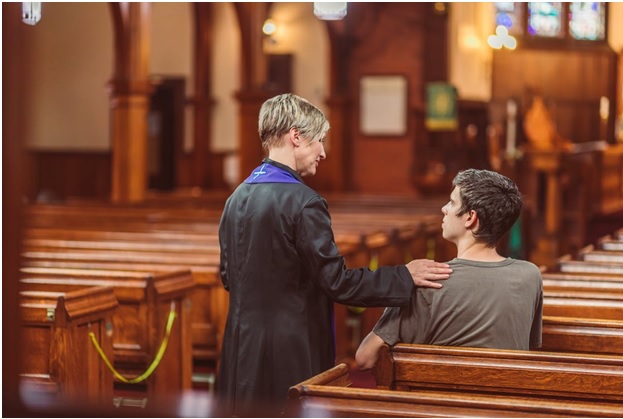 The cassock, common in the wardrobes of ordained members of the Western Catholic Church and Eastern Orthodox Churches, is a type of ankle-length garment worn as a part of the habit of priests. Not technically a vestment is it more an aspect of their everyday clothing. Another garment known as a surplice is commonly worn over top of the cassock, in which case the arrangement is known as a cassock and surplice.

Reaching to the ankles, full-sleeves, and girt about the middle with a special belt known as a cincture, the cassock likely evolved from a secular tunic. Over time, as Christendom expanded north and west into some of the colder regions of the European continent, the cassock was worn not only for its form, signifying a place within the clergy but also for the function of keeping the wearer warm.

Though the cassock and surplice have traditionally been very plain, simple garments lacking in ornamentation, they are sometimes floridly colored. As in other aspects of liturgical dress, the color of clerical garments bears great significance. These are some of the more common colors in cassocks, along with a brief exposition of the white color found in surplices.

Black is actually the standard color of the cassock. Classically, many cassocks were black, and many today still are. Because black is a plain, humble color, it can be seen as a symbolic reminder that the clergy member’s duties are not only to the self but to all of mankind. The black cassock is a humble reminder that the clergyman or woman is still human and still bears secular duties.

Black may also be purposely used as the color of mourning. Priests officiating or presiding over funerary services may choose to wear black as a mark of respect for the deceased or for the family of the deceased.

Interestingly enough, some modern interpretations of the use of black as a vestment color suggest that it is worn out of hope of the resurrection, and the promise of salvation that followed; death, followed by the promise of life.

There are also a number of cassocks that are bright red, which is a far cry from the deep black that is so much more popular. Red, a striking and inflaming color, can be seen as a symbolic representation of a number of different ideas and concepts.

Red is the color of fire, and as such it is used as an inflammatory reminder of the flames of perdition that await sinners. As the color of blood, it is also used as a symbol for commemorating Christ’s passion. It is therefore also a color used in homage to martyrdom, and red vestments are occasionally worn for the Feast days of Martyrs. Red vestments are also reserved for Palm Sunday, Pentecost, and the Feast of the Lord’s Passion.

It is not uncommon to find cassocks that are created from rich purple fabrics. While purple was once the color of royalty, at least in the scope of liturgical dealings, it takes on a different meaning.

In the Church, purple is the color of penitence and humility, and it is also sometimes reserved as a color of mourning. Because purple is associated strongly with penitence, ordained members of the clergy sometimes wear purple cassocks during the Seasons of Advent and Lent, symbolizing penitence and the hope of forgiveness.

Because of the nature of the celebration, and the mourning involved, some clergymen also wear purple garments one Good Friday. Purple is also a color reserved for some Vigils.

The surplice, by contrast, is always a white garment. It is typically made of white linen or cotton, has a square yoked neck and wide sleeves, and reaches to the waist. Longer garments that appear basically the same but are longer, reaching to the ankles, are known as albs. Surplices are occasionally worn by members of the clergy (priests and others) over the top of a cassock, but they are also sometimes worn by acolytes and altar servers. Surplices are occasionally used as a choir dress.

While the white of the surplice is a constant, it is not without symbolic significance. White can be variously seen as a symbolic representation of purity, Divine Love (Charity), victory over the darkness. Widely, it is seen as representative of the purity of God’s Divine Love for the world, and for the hope of salvation.

The color white is also associated with certain liturgical seasons and observations. White is sometimes worn during the Christmas and Easter seasons, as well as for the Feasts of the Lord and Mary, and during All Saints Day.

Take a look through our high-quality collection of unique clerical vestments and other garments and give us a call if you have any questions about any of them, at 877-453-3535. You can also set up a time to come visit us in our showroom in Hamilton, New Jersey if you’d like the firsthand experience!