It is important, every now and then, to draw the distinction between the many different types and styles of garments and liturgical vestments that we sell here at Divinity Clergy Wear. No doubt, to the uninitiated, many of them will seem all too similar.

With that in mind, let’s peel back some of the layers on the surplice, which is one of the most commonly encountered liturgical vestments in the Western Church.

What Is a Surplice?
To many of you reading this, a surplice will likely be a familiar garment even if you did not know the name. It is a white garment made of linen or cotton which reaches to the knees. It often has a square neck and it also features wide, open sleeves.

These garments may be elaborately decorated with white linen or lace along the throat and at the cuff or hem, although some are plainer than others.

It is likely that this garment evolved over time from a garment known as an alb (see below) which is also still worn in the Church.

Though commonplace in Western Churches, notably in Roman Catholicism and in the Anglican Church, this garment has no equivalent in the Eastern Orthodox Churches.

What Is the Difference Between an Alb and a Surplice?
It is likely that the surplice originated from the alb. At the very least, at one point both of them looked very similar.

The alb, which takes its name from “albus,” which is Latin for “white” is a very similar garment, also made of white cotton or linen, and also with wide sleeves.

The main difference between these two garments (physically, at least) is that the alb reaches to the ankles or to the ground, whereas the surplice typically only reaches to the knees.

That said, in modern times some designers have created longer surplices that reach to the ground, just like the alb.

Why Is It Called a Surplice?
This garment, which is also known as a soutane, has an interesting etymological origin. This is because, originally, it was worn over the furs. This is how it was given the name, which derives from “Super Pelliceum”, or “Over Pelts” in Latin.

Interestingly enough, it is often paired with (and worn over) the cassock by certain priests. The cassock is no longer made of furs or heavy pelts, but it retains the heavy, insulating features it once had; this may give an origin for the naming of the first surplices.

What Does the Surplice Symbolize?
The surplice, which like the alb, is white, may be given a symbolic ascription. Just like many other white-colored clerical robes, garments, and other vestments, the white color may be interpreted as a symbol of divine purity.

The white color may be interpreted as symbolic of divine purity, charity, or even of hope or innocence.

Some specifically see its white color as a symbol for the purity of the sacrament of Baptism, or of the washing away of sin.

Who Wears a Surplice?
The surplice is typically paired with other garments as it is never worn alone, and it is never gathered with a cincture.

Among the many who wear surplices are: 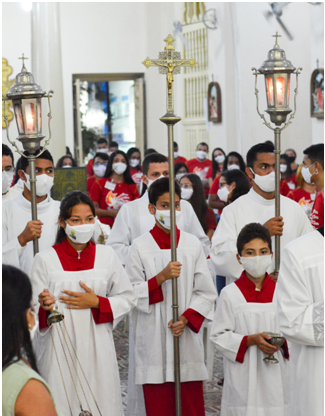 ●Priests, who often wear them over their cassocks, in which case the arrangement may be referred to as a “cassock and surplice.”

●Acolytes, in attendance to the priests presiding over the service.

●Choristers may also wear a surplice over their other garments.

●Anyone else participating in a Roman Catholic or Anglican Mass may wear a surplice.

In the Roman Catholic tradition, clerics, acolytes, altar servers, and lectors may wear them. They are among the garments considered to be Sacred Vestments.

The Anglican Church prescribes the use of the surplice for all ministers engaged in ministration.

What Other Garments Can Be Worn with a Surplice?
The surplice is never worn alone and it is rare for garments to be worn over it, although they sometimes are.

Some priests officiating service will wear a cassock and a surplice over it, as may acolytes or other clerics assisting them. During the Eucharist, it is acceptable for a priest to wear a stole over a cassock and surplice.

In the Anglican tradition is it customary to wear a surplice over the cleric’s other garments, and a tippet over all. In a rare instance in which a vestment may be worn over it, a bishop may overlay one with a chasuble, as a component of a bishop’s choir dress.

Contact Us to Learn More!
Interested in learning more about this unique historical vestment? Perhaps you simply need a supplier that can keep you prepared with high-quality clerical vestments such as these. In either case, you’re in the right place!

Check out our collection of surplices and clergy vestments via the previous links and if you have any questions feel free to reach out to us at 877-453-3535.